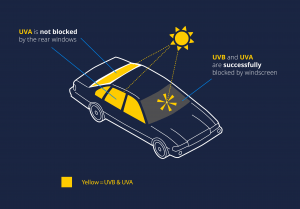 Experiment reveals people can develop skin damage when behind the wheel, as one in four (28 per cent) have burnt through a car window

Drivers are at risk of sun damage while travelling, as temperatures across the UK are set to soar, new research finds.

More than one in four (28 per cent) UK motorists have burnt through a van or car window, according to new research from Confused.com. However, it seems that people are completely unaware of the risks, as more than two in five (44 per cent) didn’t know you can get sun damage while driving with the windows closed.

To explore the issue further, Confused.com conducted an experiment with the help of Melanoma UK. The results of the experiment found drivers can still develop sun damage while driving, even with the windows closed. And the results show ‘the driver’s side’ or right-hand side of the body is more likely to be affected, commonly known as the ‘white van tan’.

How this can happen is something that’s baffling drivers, with more than one in seven (15 per cent) confused about how you can catch sunburn through a closed window. To help people clearly see the impact this can have, Confused.com has visualised how UV rays can reach drivers through van or car windows. Created to help motorists understand the impact of sun rays while driving, the guide also provides some top tips on how to protect yourself from sun damage.

Worryingly, the sun’s piercing rays have affected many drivers. However, this isn’t surprising given that one in six (17 per cent) never apply sun cream in the UK. This is despite more than two fifths (44 per cent) sharing their concerns about developing skin cancer, or skin damage (43 per cent). Perhaps this is because one in eight (12 per cent) drivers don’t know the level of sun protection factor (SPF) they should be using for their skin.

But as the UK braces for another heatwave, drivers should be investing in sun protection, especially now that normal driving habits have resumed. According to the research, drivers were spending a lot less time in their cars or vans during lockdown. But as the rules ease, they expect to spend two hours per day in their car, on average. And worryingly, van drivers are more at risk, as they’re expecting to spend three hours per day in their van, or 21 hours per week, compared to the 14 hours spent by the average UK driver (+50 per cent) now that lockdown has eased. And this is echoed in the fact that nearly half (45 per cent) of van drivers have suffered from sunburn while travelling.

It’s clear many drivers are risking sun damage by not using sun cream. And some drivers are actively trying to catch a tan – one in eight (12 per cent) admit they’ve deliberately rolled down the window for this reason. But doing this will increase the risk of sun damage on one side of the body. And this is something that was highlighted in Confused.com’s experiment. The experiment used ultraviolet (UV) technology to pick up where skin had been damaged by UV radiation on a van driver from South Wales. The results showed he had more sun damage on the right side of his face and right arm – parts of the body that were more exposed to the sun while driving.

Daniel McCulloch, van insurance expert at Confused.com, says: “When we’re in our car or van we feel protected from the elements. But our guide shows that sun rays can still pierce through the windows, so we’re not as protected as we might think. This clears up any confusion on how we can still get sunburn while in the car.

“Now that lockdown is starting to ease, a lot of people are heading back to work and spending more time in their vehicles. And van drivers are particularly at risk of getting sun damage if they don’t use sun cream, as they spend more than 20 hours per week driving around.

“Us Brits like to do everything we can to catch a tan, but on a sunny day we should be applying sun cream, even before we get behind the wheel, to reduce the risk of sun damage.”